Steinberg Hart Architects – using the Project for Public Space’s placemaking principles – has reinvented the site plan and aesthetic design for Agrihood.  Originally, the future home of Agrihood was an agricultural research farm known as BAREC (Bay Area Research and Extension Center). The opportunity to revive Santa Clara’s proud agricultural heritage while delivering critical below-market rate housing for seniors and other groups struggling to stay in Santa Clara inspired the community’s imagination and spawned collaboration. Housing and agricultural advocates sought Core’s expertise to create an actionable plan for their vision, and a partnership was born. Core ran with the community’s priorities to shape the forward-thinking and contemporary urban concept. By integrating crucial housing for Santa Clara’s seniors, veterans, and middle-income workers with lush, fertile farmland and open space adjacent to one of the city’s busiest transit corridors, Core delivered while remaining true to the community’s goals.

The preliminary planning application was submitted in December 2016. After continued engagement with the City and community, Core resubmitted its plan in January 2018. Throughout the intervening period, Core engaged The Project for Public Spaces (PPS) to develop refined, clear, and inspired recommendations for the site; many of which have been implemented by Core to fulfill its vision for what’s possible in one of Santa Clara’s last large open spaces. The new plan highlights placemaking’s potential to connect and complement privately-owned land, public amenities, and existing infrastructure for the benefit of the whole city. The January 2018 submittal reflects the output of Core’s partnership with the project for Public Spaces.

From the outset, Core has prioritized delivering key elements which will truly make Agrihood an intergenerational community for residents of all backgrounds.

Great care was exercised to ensure style and materiality reflect the existing architecture around the development site. Landscaping will include native and productive plants, and reflect local growth and green design.

The Agrihood’s urban farm is a game-changing approach to balancing the demands of a modern, walkable city living with providing residents and neighbors crucial outdoor space for physical and mental nourishment.  The new plan actually increases the open and productive space for agricultural use. 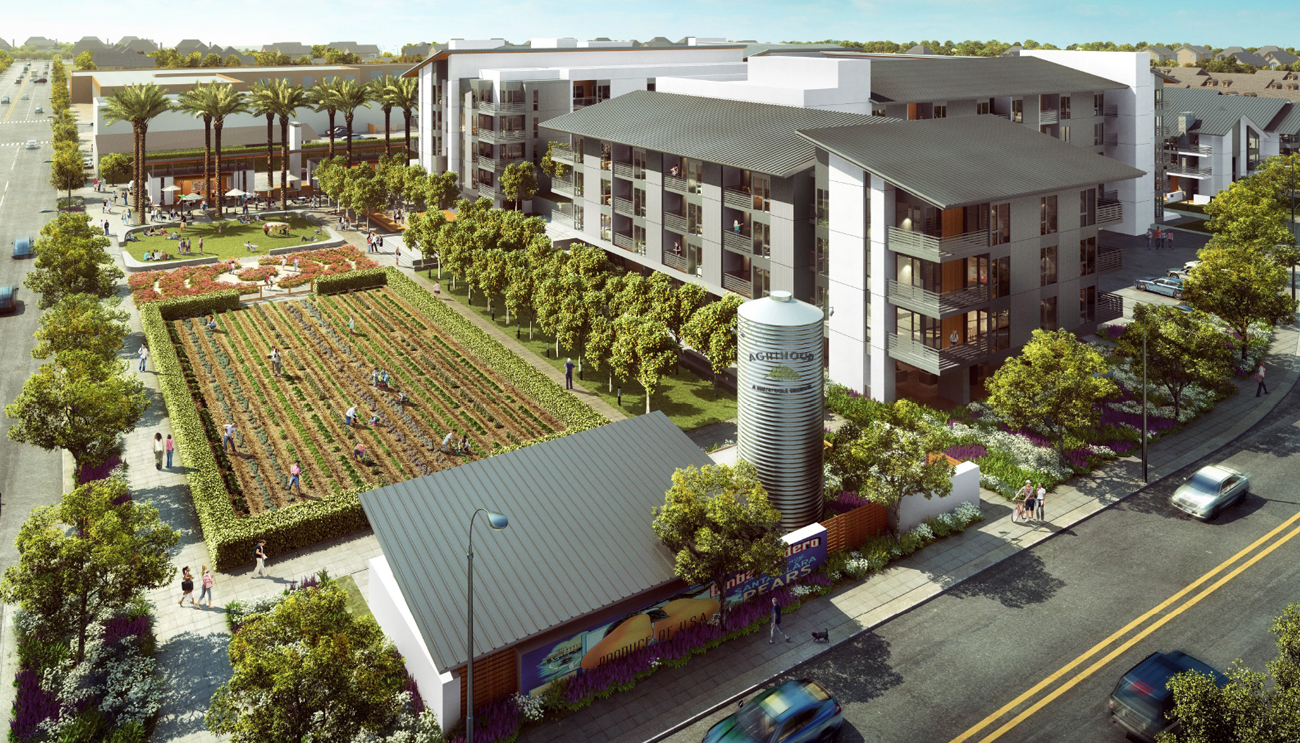 The new site plan and schematic design was developed by leveraging recommendations from PPS to create a new “there, there” in Santa Clara while maximizing open space and new social uses for the whole community.

Core had the unique task of harmonizing the desire to maximize the sense of place and belonging, balanced with extensive farmland and open space, with requests from neighbors to limit building height.

Townhomes and open space will be immediately across from existing homes, and much of the massing will be clustered nearest to the intersection at Winchester Boulevard and opposite the shopping plaza.

Agrihood’s mission will extend beyond this generation of Santa Clarans, and beyond the geographic reaches of the Bay Area.

Core is actively pursuing partnerships with local and regional universities and colleges, high schools, elementary schools, foundations, and non-profit research institutions to educate, train and inspire the next generation of environmental stewards.

Agrihood will enable the whole community to find fresh, hyper-local produce, develop on-the-job skills at the agricultural center, and will deliver a new intergenerational hub for the whole city.

Current plans for Agrihood call for 376 parking spaces for residents and visitors in an onsite garage.

The core team is working to establish agreements with the Valley Fair Shopping Center, which is directly across Winchester Boulevard, to use the ample garage space to accommodate any event overflow parking while freeing as much space as possible for the farm and open areas.

The circulation and entry-exit plans have been updated to address neighbors’ concerns about traffic flow and emergency vehicle access.